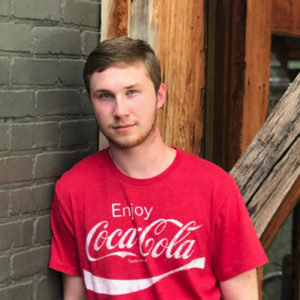 Ezekiel Nole Hall is a student at Middle Tennessee State University majoring in Criminal Justice Administration with a minor in Psychology.   On weekends and during the summer, he works for RockWater in whatever capacity he is needed.  Ezekiel is a natural, having grown up in and around television studios and edit bays.  He has a great interest in production and often brings a fresh, new creative approach to RockWater projects.  Ezekiel was only a few months old when he made his first cameo in an informational video for the Tennessee Board of Regents.  It was just the beginning of many appearances on Tennessee’s Wild Side and in educational and informational videos for such businesses and organizations as Thomas Nelson Publishers, the Tennessee Arts Commission, Tennessee Department of Health, Tennessee Tourism, Meriwether Lewis Electrical Cooperative and most recently the CMT hit show, Nashville.  Ezekiel is a Wild Side Guide but also enjoys videography and production.  He is relentless with research and study and has kept a 4.0 for the last five years of his schooling.  He plays guitar and watches his share of television when not on location.